The wireless Extinguishing Aerosol Generator control system enables triggering generators operated within fixed or portable extinguishing systems without the need to use a cable-based system. The system is particularly suitable wherever it is impossible to lay a cable system, e.g., in warehouse, historic buildings, etc. The control system makes it possible to temporarily deploy the aerosol generators in rooms where construction and repair works are carried out with a high risk of fire. In the event of a fire, the generators can be triggered manually by the personnel in the room, who should then leave the room as soon as possible.

In order to facilitate the operation and configuration of system components, the manufacturer provided an application that runs on MS Windows, and which enables to easily and quickly program all devices, conduct maintenance and control their current operating status.

The system consists of:

A BSG 32 base module – a system controller that controls the operation of a maximum of 32 wireless MWG actuator module, operating within the 868 or 2400 MHz band. The BSG32 base module periodically verifies the efficiency of each MWG module. Communication is two-way and ensures the exchange of all relevant data, such as verification of radio line occupancy, each modules’ efficiency, MWG module battery charge status, generator trigger circuit continuity, etc. Detecting a failure within the system or one of its elements is signalled on the control panel of the base module via LED indicators and an acoustic alarm. Simultaneously, the BSG32 base module sends information about the detected damage to a fire extinguishing control panel or the fire alarm control unit.

MWG actuating module – a module intended for triggering the operation of a single generator, installed generally inside the generator housing. After receiving a signal from the BSG32 base module, it activates the generator. The module’s processor conducts an internal inspection and measurements of operating parameters, including the battery charge status and the ambient temperature. At specified time intervals, the MWG actuating module sends a report on the current operating status to the BSG32 base module. The MWG module’s operating status is locally displayed via LED indicators on the module cover.

The BSG32 base module has two operating modes:

As an automatic fire extinguishing controller which supervises the readiness of MWG actuating modules and after the “start extinguishing” button is pressed, triggering the extinguishing aerosol generators. 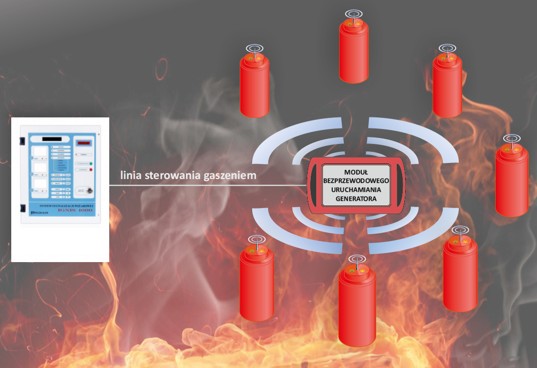