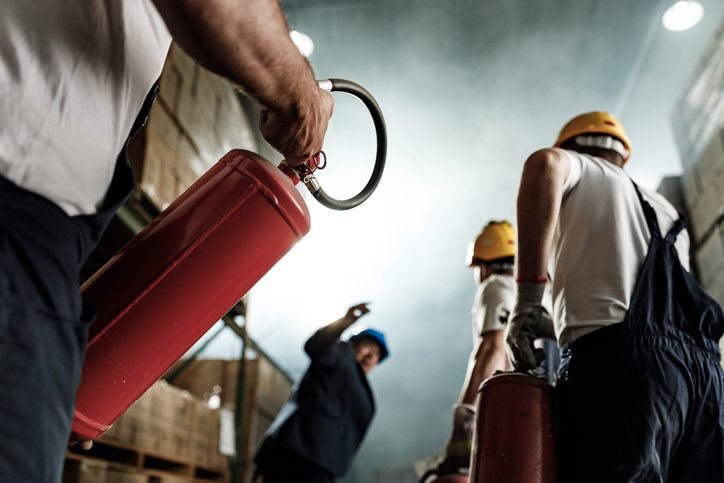 Extinguishing aerosol generators are a modern and secure fire-fighting solution applied as an alternative to sprinkler systems, as well as CO2, powder, foam and gas suppression systems. They are primarily used in large facilities, such as warehouses, industrial halls, garages, boiler rooms, server rooms, telephone exchanges and others. What does the aerosol extinguishing process look like and how does it differ from other methods?

An extinguishing aerosol exhibits properties similar to BC-class extinguishing powders. It is suitable for use in confined rooms, to extinguish LV and MV electrical systems, and for certain solid bodies and liquid flammable materials. Extinguishing a fire using an aerosol involves breaking the combustion reaction chain, which means binding all unstable flame particles by active aerosol component particles, namely, alkali metals. Before the aerosol appears at the nozzle outlet, it passes through the cooling system.

What are the advantages of aerosol generators?

The generator is triggered electrically by an automatic fire detection system or thermally, by the ignition of a thermo-sensitive fuse. Aerosol extinguishing systems are appreciated by customers, because they:

Be sure to purchase generator aerosols from reliable suppliers. In Poland, they are marked with the CNBOL certificate of compliance. Aerosols are effective even in the case of A-class fires, provided they are in the surface fire phase. If the extinguishing concentration is maintained for some time, the glow sources will cool down spontaneously due to lack of flames. Aerosols are also recommended in the case of an electrical device fire risk, since they are dielectrics. Their presence in the air does not cause so-called breakdowns.